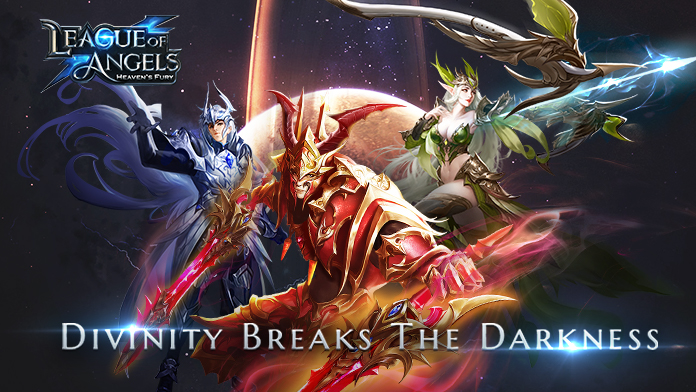 "League of Angels – Heaven's Fury" is a revolutionary 3D online action RPG that takes place in a fantastical world loosely based on Western mythology. The gods have fallen to corruption, and as the chosen, it is up to the player to gather the legendary Angels and reclaim the heavens. During their journey, players will discover a wide variety of gameplay and features such as Angel Transformation, Tower of Eternity, Trial of Ares, Royal Quest, and multiple PvP modes. The game’s real-time combat combines visceral action with spectacular visual effects to give players a truly engaging experience. In addition, the game’s traditional story mode uses in-depth storytelling and vivid animations to put the player at the forefront of this war for the heavens.

In the Theogony, everything arose from chaos... When Heaven and Earth were yet unformed, it was but one being, known today as Chaos, who shrouded all and filled the cosmos. The first of all beings, Chaos gave birth to Gaia, mother of the Earth; Tartarus, god in the abyss of Hell; Erebus, god of darkness; Nyx, goddess of the night, and Eros, god of love. This was how the world began.

As the Archangels' Sword of Revelation, Heaven's Fury can awaken and obtain the power of the angels. The Player will draw on this power to confront and seal the evil and suffering unleashed by Pandora's Box.

Zeus, king of the gods, learned about the impending Twilight of the Gods from a prophecy. He sought to use the power of the Box to fight it, but he was unfortunately corrupted by the Box and became a slave to the demons. The whole world was plunged into disaster. Humans and gods alike could not escape from the fate of being controlled by the Box. Only by sealing the evil and suffering together with the Box can they save the world.

Because the evil and suffering of Pandora's Box were born of the Flames of Olympus, only purely spiritual and incorporeal angels were unaffected by the Box. Holy and courageous angels will protect and help the Player to save the world.